< Back to the travel guide 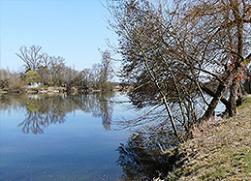 The beauty of the Garden of France is reflected in the Loire River, the longest river in France, with vineyards, gardens and lush pastures, this tranquil landscape is any nature lover’s dream.

When we mention the Loire Valley we think mainly of the Loire castles (some of the finest French castles), the Loire Wines (refreshing sparkling and full bodied reds), the gastronomy with fine Loire cuisine...but also about the Loire River...

The tranquil Loire River is the longest river in France, flowing westward from the south of Cévennes through Orleans and the city of Tours, and spilling into the Atlantic Ocean at Nantes. Stretching for over 1000km, and with tributeries which cover 117 000km², the Loire River drains into more than 1/5 th of France.

On the 2nd December 2000, the UNESCO adorned the stretch of river between Maine and Sully-sur-Loire as a World Heritage site. The Loire River was finally recognised for its exquisite, cultural landscape - boasting exceptional views of many historical cities, the magnificent chateaux of the Loire Valley and pastoral lands which have been fashioned by centuries of agricultural practices.

The enjoyable temperate climate along the Loire River is due to Atlantic influences and benefits the remarkably diverse range of animal and plant species which exist in and long the river. The Loire is the only free-flowing river in all of Europe. The lack of dams (except further upstream) allows the river to flow naturally; precisely the reason why the Loire River is so popular for boating.

The Loire runs through 12 departments of France and many quaint towns and cities, including Orleans (Loiret), Blois (Loir-et-Cher) and Amboise and Tours in the Indre-et-Loire department. This extensive stretch of river has served 2000 years as a navigational highway in France.

Historically the Greeks and Phoenicians used the Loire to transport goods to the west Atlantic coast; the Romans utilised the river until Roanne, and the Loire was the route used by the Vikings to attack the city of Tours. A typical journey from Orléans to Nantes took 8 days and up to double this if travelling upstream. During the 19 th century, the Loire River (between Orléans and Nantes) transported approximately 1843, 70 000 people with the use of steam-driven boats, however the implantation of rail systems during the 1840's saw the decline in the navigational use of the Loire. Today the river serves as a unique reminder of the rich history (the Renaissance, the Plantagenets Dynasty...) associated with the Loire River and its surrounding countryside.

If you are considering visiting the Loire Valley, please have a look at our selection of Loire Valley Tours and our vast range of Special Interest Tours.

The Loire Valley, known as “The Garden of France”, boasts a remarkably tranquil and lush landscape; a region sure to impress nature lover or country enthusiast. There are a vast variety of touristic services providing visitors with the opportunity to discover the regions wilder, unspoilt areas.

Visitors can discover, on board a traditional boat trip along the Loire River the unspoiled surroundings and witness its many contrasting habitats; from open waters to dense mature forests. It is important to note that swimming is in the Loire River due to its extremely dangerous currents.

In 2000, UNESCO declared the Loire River as a World Heritage Site; making it the first river in the world to be recognised as a heritage site. This distinction was bestowed upon the 1012km stretch of river, which is home to a wide variety of freshwater fish and a major migration route for birds.

Bird species of the Loire include many that are absent or rare in Britain. These include: Osprey, Black Kite, Corncrake, Stone Curlew, Yellow-legged and Mediterranean Gulls, Black and Middle Spotted Woodpeckers, and Bonelli's Warbler.

The Loire is home to some native species of dragonflies, including the Yellow-legged and the Green Club-Tailed varieties. Also home to the Loire and the most recent addition to the natural habitat is the wild European beaver.